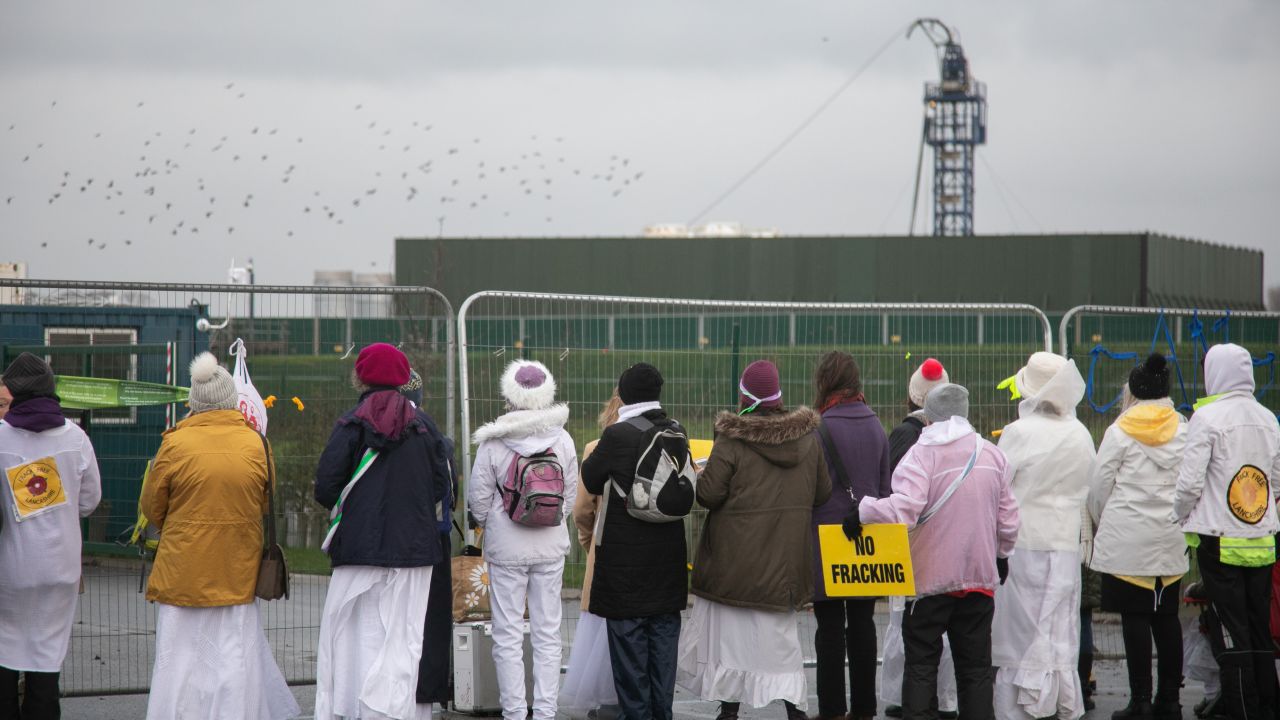 Why we stand in silence every Wednesday The Women in White

Since July 2017, Women’s Wednesdays have become a regular feature of the long-term protest against fracking in Lancashire.

Local women calmly march to the gates of the Cuadrilla fracking site at Preston New Road.

They dress in white and stand in silence – bearing witness to the threat to their communities and the environment.

This was their 69th gathering. With Cuadrilla still wanting to frack in Preston New Road, the peaceful march will continue every Wednesday.

All photos and interviews by Kristian Buus

"It’s a call for calm. It’s about 15 minutes of silence and contemplation."

"Doing the Women In White protest has given us confidence. There’s something for everyone to do."

"We've developed good friendships. Some of the ladies have opened up about talents they have. It keeps you sane."

Meet the Women in White

The Women in White is a call for calm. We chose white as our colour because it’s a calming, peaceful colour – and the colour of new beginnings in many cultures.

We wanted to do a different sort of campaigning. We spend 15 minutes in silence and at the end sometimes we break into song. The protest is about reflection and meditation – we just let whatever feelings come, sometimes it’s anger, sometimes it’s a need to plan the next steps.

Some protestors only come for those Wednesdays because they’re too scared to come at other times.

Doing the Women In White protest has given us confidence. There’s something for everyone to do – one lady made all the white suffragette outfits, another one bakes cakes.

I won’t stop because I would feel like I’m letting my children down. I don’t want to look back on my life and think I turned away.

There was a day when I realised our protest wasn’t going to just be about waving banners. People were starting to get pushed around. We were first-time campaigners. We didn’t know what to do.

We have to have a bit of fun. That’s how we keep going. Things have been so negative, you’d go crazy if you didn’t have an alternative approach.

I won’t be able to rest until the threat of that rig is completely gone and we’ve got our land back.

We were awoken one morning in 2011 in the early hours by an earthquake.

We weren’t that worried at first. Then we found out it was connected to fracking. We’d been driving past the site every day and after the earthquake the penny dropped.

At the beginning of the campaign, we thought sending letters and meeting our MP would be enough. However, when Lancashire County Council’s decision against fracking at Preston New Road was overturned in 2016, I realised local democracy was under threat. It flew in the face of everything I believed.

Around that time, my mum got ill. Her illness followed the progress of the well – she was diagnosed when they put the pad in [the concrete bit around the fracking well], and she got worse over that summer.

When she died, I couldn’t separate the two things in my head. I wasn't able to visit her as often as I should because I was so busy with the campaign. I wondered what that was like for her.

about fracking and earthquakes.

I got involved in the anti-fracking campaign when I found out that my children’s school was close to one of the proposed fracking sites.

I started some research and it didn’t take me long to realise this was not a good idea. We formed a parents’ alliance at the school and wrote a petition which we hoped would represent the interests of the children.

But one day the children were told they could no longer discuss fracking at school. I was horrified. I’ve always been concerned about safety and the lack of procedures in this industry and I wasn’t satisfied.

When I first joined the campaign, I was helping with social media but I quickly got drawn in.

Eventually I decided to take my girls out of school and I resigned as a governor. I was not prepared ethically and morally to stand there and let it happen.

We realised that many women were struggling to find a place.

Women in White is somewhere everyone can find their place.

The first meeting was a one-off peaceful march. It was about trying not to be angry – I could never have gone on campaigning feeling so angry.

Once you’ve realised the truth of fracking, you can’t go back. You think you can trust the government to protect you, but you soon realise that’s not true.

I love the countryside and I’m a proud Lancastrian. I don’t want to see it being ruined.

I live just 500 metres from the proposed site at Roseacre*. It’s beautiful here. We have really dark skies and it’s so peaceful. We said from the start that it is simply not safe to put more than 15,000 heavy-goods-vehicle journeys a year on these roads.

The villages round here are connected by miles of narrow, winding country lanes used by farmers, walkers, cyclists and horse riders. There are few pavements and little lighting.

I just want to defend where I live, it’s very simple. If you care about the world, you know what you have to do.

*The government has since rejected Cuadrilla's planning application to frack Roseacre Wood over traffic concerns.

Keep fracking on the ropes

We are residents. We take the moral high ground. We will be here long after [fracking company] Cuadrilla have gone.

When we started the call for calm, it helped – many women joined us. They felt safer because we were in a group.

We've developed good friendships and spiced things up – we play music and some of the ladies have opened up about talents they have. It keeps you sane.

We know that our Wednesday is that little light in the week that we hold on to.

One day we’ll be stood up there waving goodbye to Cuadrilla and then we will party for a very long weekend. Lancashire will have the biggest party ever.